30 Days in May Bonus: No. 31, John Mahler, 1972 Harbor Fuel Oil McLaren/Offy. We wrap up with John Mahler, who was one of eight rookies in the starting lineup for the 1972 Indianapolis 500. He had qualified for the 1971 race but was “bumped” by his car owner, Dick Simon.

Mahler had qualified Simon’s back-up car in 1971, becoming the fastest rookie in 500 history in the process. But then Simon was bumped, so he took over Mahler’s ride for the race.

So began what was to be an interesting, colorful Indianapolis 500 career for Mahler, who made four starts from 1972 through 1979. In 1973, he was part of the Champ Carr Enterprises team with Sam Posey. Mahler likely would have made the race had he been allowed to complete either of his two qualifying attempts, both of which were tracking toward an average fast enough to make the race.

As it turned out, Posey was bumped and Jim McElreath took over Mahler’s car and made the field in the final minutes of qualifying.

Mahler’s best finish was in 1977, when he was credited with 14th after getting some relief help from Larry “Boom Boom” Cannon. He almost squeezed into the 1983 lineup, accepting a speed that was some 27 mph off the pole speed with the hope that rain would curtail qualifying. The gamble almost paid off, but Mahler was knocked out by Dennis Firestone, who completed his run as showers hit.

In 1972, Mahler wound up 22nd, sidelined by piston failure after 99 laps. A highlight film produced by Channel 6 in Indianapolis indicates that Mahler had to pull in before the start because he forgot his gloves.

Posted by Jeff Majeske at 8:20 AM No comments:

30 Days in May: No. 30, Arie Luyendyk, 1990 Domino’s Pizza Lola/Chevrolet. It’s hard to believe that it’s been more than 30 years since Arie Luyendyk won his first Indianapolis 500 (and first IndyCar race) after starting third. Domino’s chose the number 30 as a tie-in to its “30 minutes or less” delivery guarantee, a slogan that eventually was abandoned in the interests of safety. The Flying Dutchman added another 500 win in 1997 and still holds the one-lap and four-lap qualifying records, which he set in 1996.

Posted by Jeff Majeske at 8:12 AM No comments:

30 Days in May: No. 29, Pancho Carter, 1987 Hardee’s March/Cosworth. Pancho Carter, the 1974 Rookie of the Year, was a steady presence in the 500 lineup through 1991, missing only the 1988 race. His big day came in 1985, when he won the pole with a Buick-powered machine. The “TT” indicates this car was a backup to a backup, the result of Carter taking a "header" in practice in his primary car, then withdrawing his backup car to qualify this one.

During this time, the Hardee’s restaurants in the Indianapolis area gave out trading cards of IndyCar drivers if you made a certain purchase. It sure would nice to have a set of cards again.

Posted by Jeff Majeske at 8:07 AM No comments:

30 Days in May: No. 28, Ryan Hunter-Reay, 2014 DHL Dallara/Honda. Ryan Hunter-Reay became the first 500’s U.S.-born winner since Sam Hornish Jr. in 2006 when he held off Helio Castroneves to cap a thrilling duel. Hard, clean and precise racing in the closing laps made the 2014 race one of the most memorable.

This year, Hunter-Reay was a bit of a surprise in making the Fast Nine Shootout. He'll start seventh on Sunday.

Posted by Jeff Majeske at 6:32 AM No comments:

30 Days in May: No. 27, Janet Guthrie, 1977 Bryant Heating and Cooling Lightning/Offy. Janet Guthrie was something of a retread rookie in 1977 after trying valiantly the year before to make the race in a Vollstedt that was, to put it kindly, a bit long in the tooth.

Updated equipment made a big difference for Guthrie the next year, as she made the field comfortably on the last day of qualifying. Mechanical woes doomed her to 29th place. She made the race the next two years, with a best finish of ninth in 1978. It wasn’t until 1992 that another woman, Lyn St. James, qualified for the 500.

Bryant has been a sponsor at Indianapolis since the furnace and the air conditioner were invented (just kidding) and has been associated with Tony Kanaan in recent years.

Posted by Jeff Majeske at 5:44 AM No comments:

30 Days in May Bonus: No. 44, Dick Simon, 1973 TraveLodge Eagle/Foyt. I miss guys like Dick Simon around the Speedway. Energetic and enthusiastic, Simon was an outstanding ski jumper and parachutist before he pursued a career in Indy cars. Had the X Games been around in the 1960s, he probably would’ve been a star.

As for Indianapolis, Simon usually was saddled with marginal equipment that he had to hustle into the show. His 1973 mount was pretty decent though, and Simon ran up front before piston failure sent him to the sidelines for a 14th-place finish. 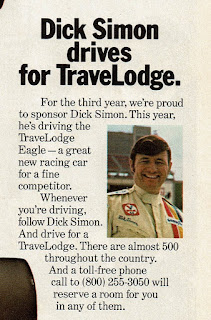 Toward the end of his career, Simon obtained better cars, leading to better results – he was sixth and ninth in his last two races in 1987 and 1988, respectively. Simon is bald, but he donned a toupee for this ad in the 1973 Indianapolis 500 program.

Posted by Jeff Majeske at 7:30 PM No comments:

30 Days in May: No. 26, Marco Andretti, 2006 NYSE Group Dallara/Honda. Marco Andretti added an agonizing “almost” to the family legacy of Indianapolis 500 frustration and heartbreak right off the bat. As a 19-year-rookie, Andretti led coming out of Turn 4 on the last lap before Sam Hornish Jr. blew past to nip him by 0.0635 of a second.

In 2020, he won the pole in a stirring effort, the first for the family since Mario’s in 1987. Race Day was a disappointment as Marco wound up 13th.

Posted by Jeff Majeske at 5:53 AM No comments:

This blog is an outlet for my passion for all things related to the Indianapolis 500 and IndyCar racing. I like history. My favorite era is from 1973-93. As the years pass, I feel I was very fortunate to see drivers like Mears, the Andrettis, Foyt, the Unsers, Rutherford, Johncock, Sneva, Fittipaldi and Mansell and when not just the race itself but practice and qualifying piqued interest in Indianapolis and around the world. 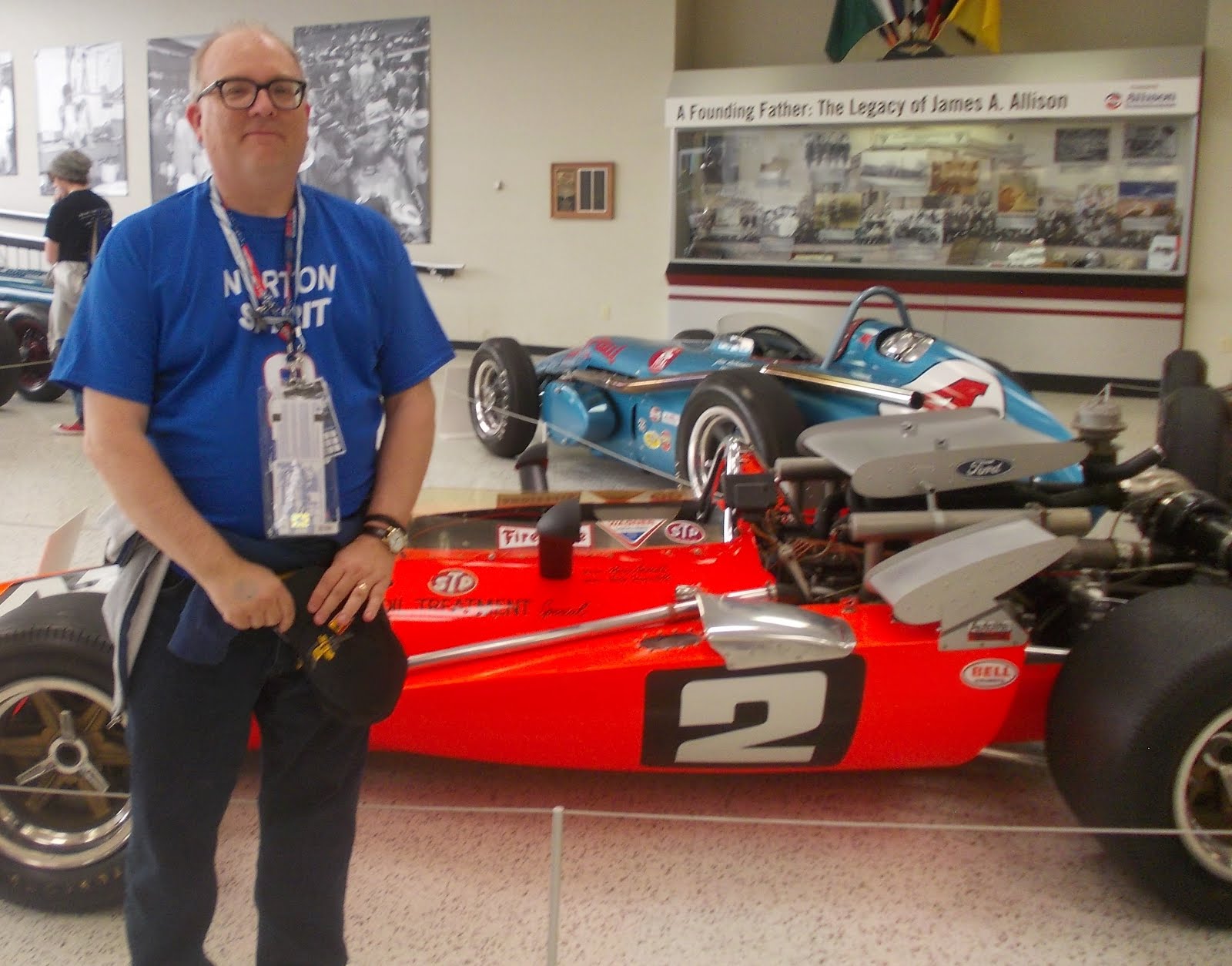 I collect just about anything related to the 500 and IndyCar racing: Yearbooks, programs, post cards, diecasts, decanters, autographs, T-shirts, media guides, newspapers, books, magazines, trading cards, bobble heads, plastic models, CDs, DVDs. I even have View Masters (remember those?) and a blow-up Goodyear blimp, which hovers serenely in my basement. I think the following sums up this mania best. Once, while at the Mailroom on 16th Street I was looking over some items, and my mother told the owner, Frank Gilbert, “He’s been hooked on this since he was about 5.” “Well, there are a lot worse things to get hooked on,” was Frank’s response. Indeed. I love hearing from fellow collectors about their prizes and how they got them.